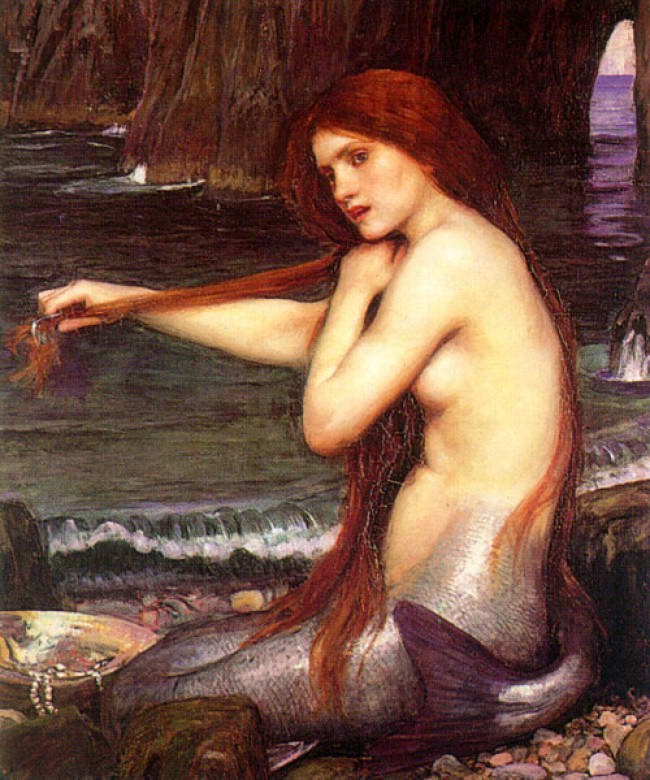 In a golden curl

With a comb of pearl

Mermaids appeared for the first time in Odyssey as marine mantic creatures who used to enchant sailors by singing and then let them die. The island where they lived was full of rotting corpses once sailors who could’t resist their singing. The term “siren song” refers to an appeal that is hard to resist but that, if heeded, will lead to a bad result.

The Greek mythology isn’t clear about their nature, origins and appearance as Homer didn’t describe their aspect but from vase paintings we know that sirens were hybrid creatures, half women half bird with wings and claws and linked with music.

By the fourth century, when pagan beliefs gave way to Christianity, belief in literal sirens was discouraged. Sirens continued to be used as a symbol for the dangerous temptation embodied by women regularly throughout Christian art of the medieval era. In a medieval bestiary dated VIII century, the Liber Monstrorum, sirens were described for the first time with a fish tail.

Through stories such as Undine or H. C. Andersen’s “The little mermaid” wrote in 1837, mermaids became a popular subject in academic painters and later Preraphaelites (especially J. W. Waterhouse) in the second half of  XIX century. Victorians fantasized that water-women sought to human love and secure a soul along with the idea of the woman- femme fatale.

It’s seems that a mermaids trend is currently going on, since lady Gaga dressed like a mermaid during her exhibit in “Le Grand Journal” singing The Edge of Glory. She is performing Yuyi the Mermaid, a finctional caracter she uses like an alter ego who appeared first in “Le Grand Journal” and later also in Sydney as a part of the Monster Hall using a wheelchair. So when Kate Perry posted on twitter a photo of herself, mid-plank and dressed as Ariel, Gaga’s creative director Laurieann Gibson said on his twitter “even though they try to steal a tail theres only 1 Mermaid”. All these rumors are really exagerated as we think about Madonna video “Cherish” 1989. Also, Gaga didn’t know that in the late 70’s Bette Midler used to perform herself dressed like a mermaid in a wheelchair .

Anyway it seems that every time someone tries to dressed up like a mermaid it always ends with some kitsch costume with shimmering turquoise tail and vomit pink hair.  There’s no way mermaids can become reality.

The Siren, by John William Waterhouse 1901

Madonna during the Blonde Ambition tour 1990 circa

Movie still from “Miranda” , a 1948 British comedy film, directed by Ken Annakin and written by Peter Blackmore, who also wrote the play of the same name from which the film was adapted. A light comedy, the film is about a beautiful and playfulmermaid played by Glynis Johns and her effect on Griffith Jones.

This 1805 illustration (artist unknown) from the Waseda University Theater Museum shows a mermaid that was reportedly captured in Toyama Bay. According to the accompanying text, the creature measured 10.6 meters (35 ft) long.

Shirley Temple in a very kitsch “The little mermaid” in 1961

Daryl Hannah as Madison in the film Splash (1984)

Tracy Lord as a mermaid in the 80’s

Lady Gaga some years ago