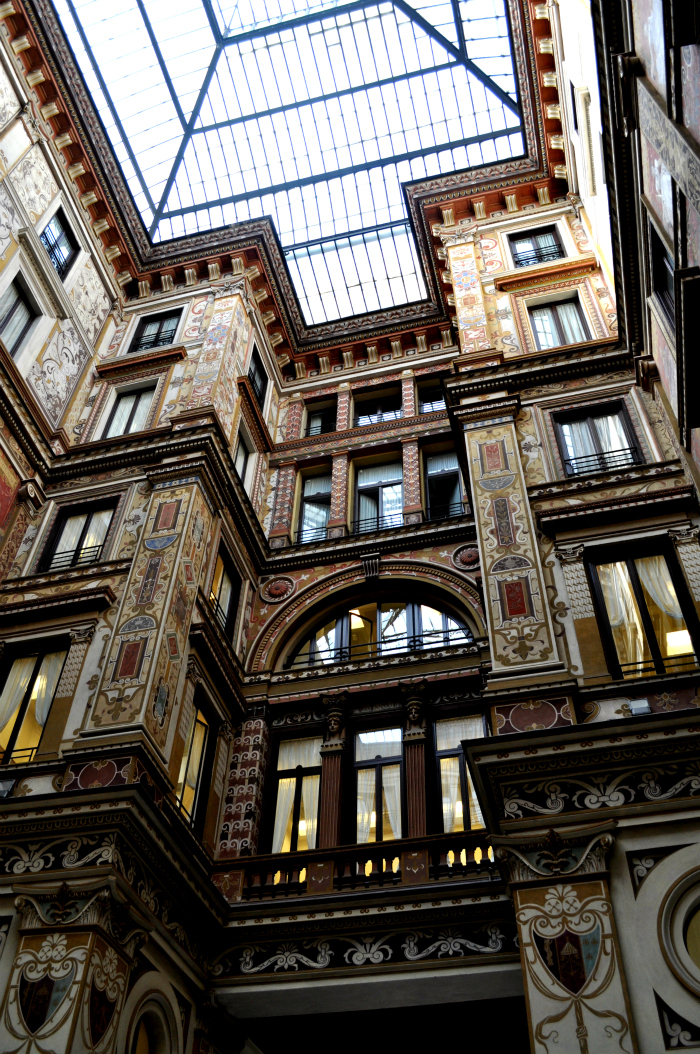 One day I was walking near the Trevi Fountain and, completly unaware, I entered in this gallery. Very few times I’ve been surprised as the first time I saw Galleria Sciarra. Totally unexpected, because hided from outside, it’s one of the lesser known treasures of Rome as well as it’s not so easy to find Art Nouveau in this city (except for museum collections) and that’s made the discovery much more incredible.

Basically the Galleria is just a passage, people just go through it and incuriously pass by and I always wondered how they can’t stop to have a look. It’s also difficult to find some information about it, all I was able to find is that the Galleria was commissioned by Prince Maffeo Sciarra to the architect Giulio De Angelis and it was constructed just after the unification of Italy in the late 1880s. It originally served as a shopping centre, but later became the headquarter of  “Cronaca bizantina” the magazine owned by Prince Maffeo Sciarra and directed by Gabriele d’Annunzio.

The interior decoration is really considerable, painted by Giuseppe Cellini between 1886 and 1888, it’s designed as a two orders woman-themed decoration. The lower one represents 12 portraits of women referred to their role in society through the stages of life, from girl, to bride and mother. The upper order shows other women depicted as personifications of virtues that an ideal woman should have like loyalty, humbleness, justice, chastity, patience. The personifications are represented as scenes of real life like The Toilette, The gardening care, The lunch time, The courteous conversation (with a portrait of D’Annunzio himself!) and others.

The decoration and the architecture is clearly Art Nouveau with Etruscan and Roman paintings influences along with a easily recognizable symbolist and also Pre-raphaelite inspiration. The building has a rooftop made of iron and glass, very innovative for that time in Rome as well as the idea of the shopping centre.

Galleria Sciarra is located at 9/10 of Via Minghetti. The building, which was recently restored it’s not too difficult to find: you may stumble upon it when leaving Fontana di Trevi, just near via del Corso. I myself am strange and unusual.