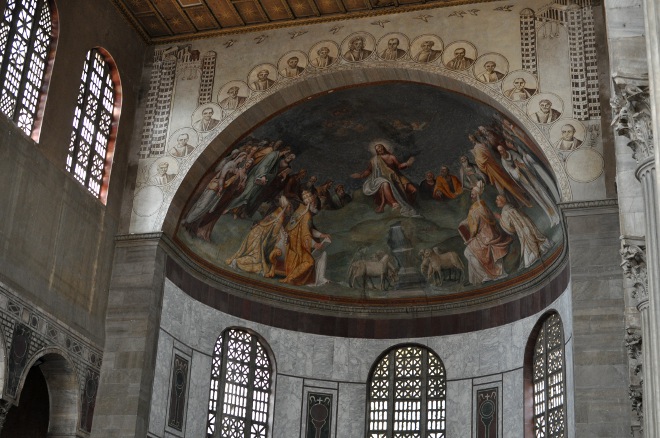 A look on two early christian churches in Rome. You can easily visit them during an afternoon, don’t missing to take a peek inside the keyhole…

The Basilica of Saint Sabina at the Aventine is one of the early christian churches of Rome, dated from 5th century. This church preserves its original style almost untouched, unlike other early christian churches such as Santa Maria Maggiore, heavily and gaudily decorated. The decorations have been restored to their original modesty, mostly white. Together with the light pouring in from the windows, this makes the church an airy and roomy place. Not far from Santa Sabina you can reach Piazza dei Cavalieri di Malta. If you look inside the keyhole of the wooden door of the Priory of the Knights of Malta, you can see San Pietro‘s dome at the end of a garden path.

The optical effect of the hole was created by the architect and engraver Giovanni Battista Piranesi, who restored the building in the second half of the 1700’s. He was obsessed, someone says, with Masonic symbolism. The Basilica of Saint Mary in Cosmedin is more famous to host the Bocca della Verità (Mouth of Truth), always crowded by tourists, even if very few of them enter in the church.

The Basilica is another early christian church, builted in the 8th century and, like Santa Sabina, it preserved its original look. In a side altar on the left of the church is kept, flower crowned, of what supposed to be the skull of St Valentine.