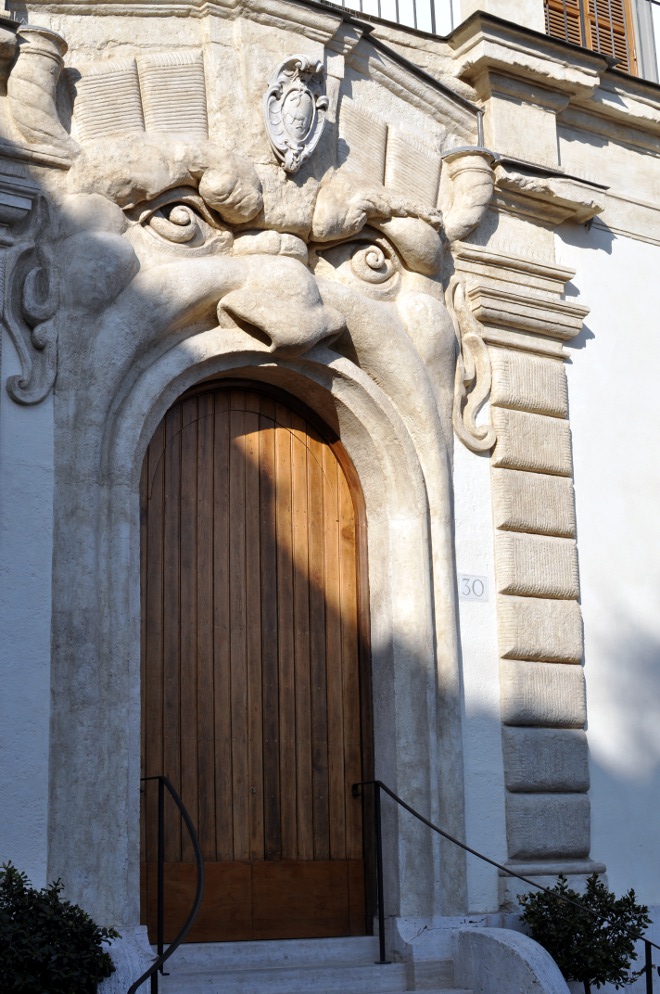 Since I first knew the story of the Cafè de l’Enfer in Paris I coudn’t stop thinking about this Palace that amazes me everytime a take a stroll in the city centre of Rome.

This is the entry of Palazzo Zuccari, a 16th century building in Rome, at the crossroads of via Sistina and via Gregoriana, on the Piazza Trinità dei Monti. It was built by Federico Zuccari, mannerist architect and painter, who purchase a plot of land on the newly laid out Via Sistina on the Pincian Hill in 1590 and decided to built what he wanted to be his studio. After almost ruined himself for this palace’s project, he died in 1609 and his heirs put on sale the palace, instead his will was to turn the palace into the Academy of Art and “hospitio dei poveri giovani studiosi stranieri”.

The Palace has 3 entrance but the most famous is the one located in via Gregoriana 30, where the door and two windows are inside the mouth of three monsters. Federico Zuccari conceived the gaping maw of hell, the mascherone, as a fantastically bizarre entrance to his garden, just like the one in Bomarzo garden which was already finished by Vicino Orsini.

The Palace was, then, bought back by Zuccari family and continued to be their property until Federico Zuccari (1843-1913), the last descendant of the family, who sold it to Henrichetta Hertz. She collected here a great picture gallery and a huge library which were donated the first to Italy State and the second to the German government after her death happened in 1913. Today The Bibliotheca Hertziana has a specialist library consisting, at the time of writing, of some 270,000 volumes, most of all about art.

Before Henrichetta Herzt bought Palazzo Zuccari, it was also occupied by Queen Marie Casimire Louise of Poland from 1702. During her stay, and then during Grand Tour, the Palace became a hot spot for artists like Joshua Reynolds, Johann Joachim Winckelmann, Jacques-Louis David and the Nazarenes. The frescoes they painted here was later removed and placed in the National Gallery of Berlin.

Last but not least, Palazzo Zuccari caught the attention of Gabriele d’Annunzio, who was a regular guest of the Palace together with Eleonora Duse, and he also described this place in his novel “Il Piacere”. old picture of the interior