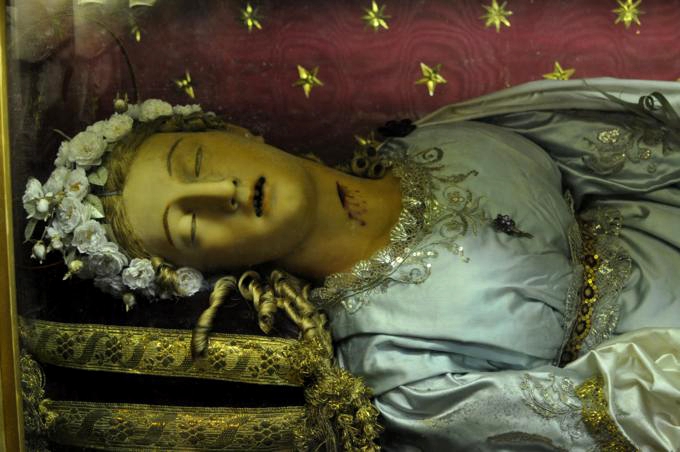 Santa Maria della Vittoria is one of my favorite places in Rome. This little church hides Bernini’s masterwork Estasi di Santa Teresa, Baroque most famous sculptural group. The saint is having a mystical experience that Bernini designed with the gestures of an orgasm. Spiritual and fleshy pleasure are portrait in the same way and both are shown as a theatrical performance. This is Baroque’s aim: to give a spiritual feeling through sensuality, an ambiguous connection that cannot be explain but only seen, experienced.

Infact the statue is an exact representation of what Saint Teresa described in her autobiography: “I saw in his hand a long spear of gold, and at the iron’s point there seemed to be a little fire. He appeared to me to be thrusting it at times into my heart, and to pierce my very entrails; when he drew it out, he seemed to draw them out also, and to leave me all on fire with a great love of God. The pain was so great, that it made me moan; and yet so surpassing was the sweetness of this excessive pain, that I could not wish to be rid of it. The soul is satisfied now with nothing less than God. The pain is not bodily, but spiritual; though the body has its share in it. It is a caressing of love so sweet which now takes place between the soul and God, that I pray God of His goodness to make him experience it who may think that I am lying.”

Just in front of Cornaro chapel, where Santa Teresa is, there’s another woman who seems resting in a peaceful and pleasing expression. She is Saint Victoria, whose ecstasy seems rather to be between life and death. As she is, infact, with the unmistakable wound on her neck but, the half-closed mouth and the eyes rolled are the same signs of woman having an orgasm.

(Saint Victoria seems to be a wax statue but the teeth seems real to me. I don’t know if there are human bones embedded in, also Morbid Anatomy was wondering about that.)