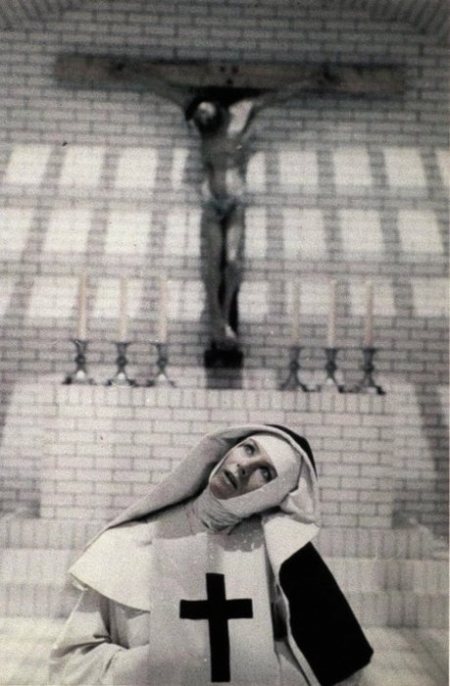 This is my little tribute to Ken Russel, who died about two weeks ago, the 27th of November. Each of his film is worth to be watched more than once, but I probably choose The Devils for the 17th century setting and the religious references, even though the film is more than a simply historic drama.

The story is an adaptation of real facts happened in Loudun, France, in 1634 when Sister Jeanne Agnes and sixteen nuns of the Ursuline convents were allegedly possessed by demons and the one convicted for this was father Urbain Grandier, accused of the crimes of sorcery, evil spells, and the possessions, based on the words of the possessed nuns themselves. These same facts inspired the novel The Devils of Loudun, a 1952 non-fiction novel by Aldous Huxley from which Russel took the idea.

When it was first released in 1971, it was banned in several countries, and heavily edited for release in others because of violent, sexual, and religious content. It was strongly censored and impoverished of its real power of denounce and artistically demaged in the name of a stupid accusation of blasphemy. I think it would be really constraining doing a film only to blaspheme or swear, moreover Russel was catholic so I think that his vision included broader scopes.

Russel focused his attention on the manipulation of the masses, that in the past were easily swayed by religion, and the way Power, intended as the private purpose of some powerful man (like Richelieu in the film), uses their ignorance in order to alterate the truth and obtain what it want. So the film shows the mechanism of manipulation, the corruption, the delirium and madness fruits of repression, the mass hysteria that leads to cruelty and tortures until the carnival of death where everything is derided death, life, sex and holyness.

There’s a deep analysis of masses behavior in this film, along with the morbid interest in understing the connection of sex, religion and death which are fatally linked together. There’s something Grandier says that impressed me the most: “Pain is Sensuality”. The film starts with a grotesque ballet of king Luis XIII, a lazy and lascivious effeminate man, totally unconcerned about everything except boys and whose favorite hobby is shooting Protestants dressed like birds. Meanwhile, in the city of Loudan lives Urbain Grandier, not a perfect man, but at least honest and truly concerned of the city’s safety, admired from all the citizens. In Loudan, that seems a futuristic city with its white and unrealistic walls, there’s a convent with the same unreal white decoration where the Mother Superior, Sister Jeanne Agnes (Vanessa Redgrave) is sexually obsessed with him and she has frequently visions about him. The most oniric scenes are the dreams of Sister Jeanne Agnes who imagines Grandier as Christ, walking on the water and crucified. The plot get more complicated when Sister Agnes requests Grandier to be the confessor of the convent and he refuses and meanwhile Richelie wants to demolish Loudan’s walls. The political aims will use religious justications and Grandier, once admired, will be accused and tortured. In an apocalitic scenario while Grandier was going to be burnt at the stake, screaming at the crowd “If you would remain free men, fight! Fight them or become their slaves!” a macabre dance is performed by nuns and inquisitors and while people laughs, the city is going to be destroyed.