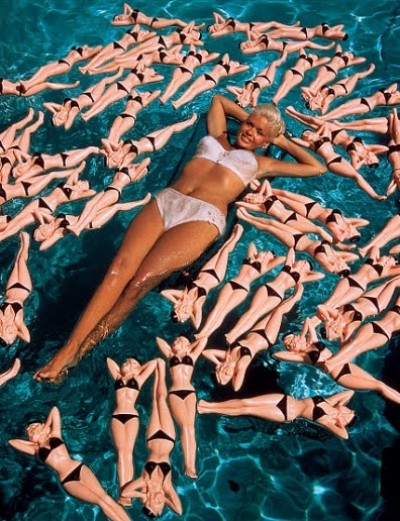 Another example of kitsch furnishing and decoration, the Jayne Mansfield’ s house, the “Pink Palace”.

In November 1957 (shortly before her marriage to Hargitay), Mansfield bought a 40-room Mediterranean-style mansion formerly owned by Rudy Vallée at 10100 Sunset Boulevard inBeverly Hills. Mansfield had the house painted pink, with cupids surrounded by pink fluorescent lights, pink furs in the bathrooms, a pink heart-shaped bathtub, and a fountain spurting pink champagne, and then dubbed it the Pink Palace. Hargitay, a plumber and carpenter before getting into bodybuilding, built a pink heart-shaped swimming pool. Mansfield decorated the Pink Palace by writing to furniture and building suppliers requesting free samples. She received over $150,000 worth of free merchandise while paying only $76,000 for the mansion itself (a large sum nonetheless when the average house cost under $7,500 at the time).

Shortly after Mansfield’s funeral, Mickey Hargitay sued his former wife’s estate for more than $275,000 to support the children, whom he and his third and last wife, Ellen Siano, would raise. Mansfield’s youngest child, Tony, was raised by his father, Matt Cimber, whose divorce from the actress was pending when she was killed. In 1968, wrongful-death lawsuits were filed on behalf of Jayne Marie Mansfield and Matt Cimber, the former for $4.8 million and the latter for $2.7 million.The Pink Palace was sold and its subsequent owners have includedRingo Starr, Cass Elliot, and Engelbert Humperdinck.In 2002, Humperdinck sold it to developers, and the house was demolished in November of that year. Much of her estate is managed by CMG Worldwide, an intellectual property management company.

The famous pink bathroom, all covered with pink shag and terrycloth.

Her husband Mickey Hargitay was a plumber and carpenter before getting into bodybuilding and built a pink heart-shaped swimming pool for her, which used to say ‘I love you Jaynie’ in mosaic on the floor of it.

The Living Room with the piano

The Office, all covered in quilted red.