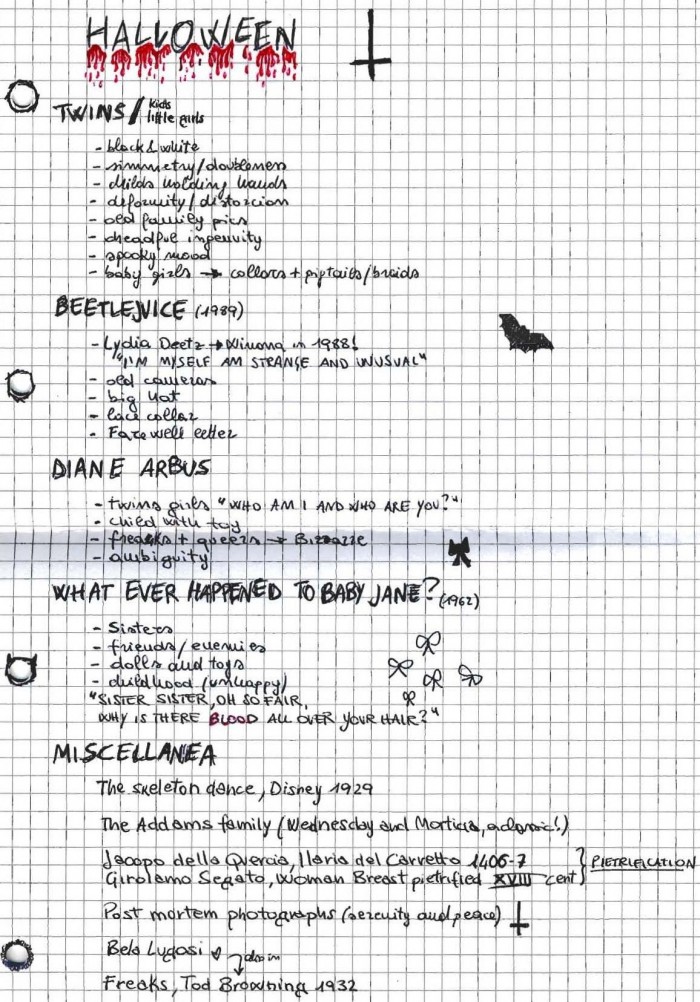 For my Halloween moodboard I took inspiration from Tavi for the idea of writing things on paper. I focused my attention on few concepts I’d like to put together in order to create something different from the halloween cliché.

I’ve been obsessed by this famous photo by Diane Arbus “Identical Twins” and I thought that all my halloween moodboard could be based on this idea of simmetry/doubleness and childs. Following: the twins in Shining by Kubrick (who said to be insired by Diane Arbus photo); Zip and Pip, the Pinhead girls in Freaks (1932) by Tod Browning; the Romanov Sisters; unknown; unknown; Daisy and Violet Hilton, the siamese twins in Freaks; Olsen sisters; Winona Ryder in Mermaid (1990); Marchesa Luisa Casati at the age of 5; Lewis Carrol with Alice; unknown; Christina Ricci as Wednesay Addams; Winona. all pictures via tumblr.

One of the first Tim Burton’s films with a young Winona Ryder. Her charater is Lydia Deetz, a goth adolescent always dressed in black. Pictures via tumblr and snaps by me. 3. What ever happened to Baby Jane?

A great old movie starring Bette Davis and Joan Crawford (enemies for real and who also fought during the film) showing the story of two sisters and the jealousy and envy between the two. Must see. pictures via tumblr and snaps by me.

The Skeleton Dance by Disney, 1929