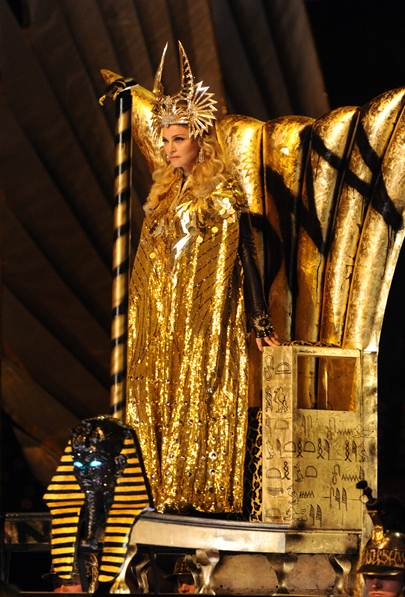 Super Bowl isn’t usually the first thing I tune into and, honestly, I am completly indifferent to big event like this as well as sport world in general. Plus, I usually try to avoid to talk about things everybody talk about, like this now. But this time the event went so kitsch that I couldn’t ignore it. I was struck by Madonna’s costume for the event, she wore three Givenchy Haute Couture costumes designed by Riccardo Tisci. I already said that Madonna is the only pop icon I can stand, but I don’t want to talk about her performance or about the other two girls who sang with her (whoever they were, they disappeared).

I saw something mystical in all this celebration as in these days I was watching “Lucifer Rising” by Kenneth Anger and I could’t resist to notice some affinities. First of all the egyptian references, which are evident both in Tisci’s costumes and in Anger’s film. Probably the egyptian mythology is the most symbolic and concernead about death that someone can see in it obscure and occult meanings. The Madonna’s costume is clearly inspired by the Goddess Isis, the mother of Horus, including wings and headdress of Hathor.

Anyway, the idea of a flying God was also in greek mytholgy: the God Hermes, herald of the gods, was always represented with winged sandals or winged cap and a serpent-staff. He also used to play lyra, which he invented, the same lyra Madonna was hanging during the show. However, during the religious syncretism happened in hellenistic period, appeared a new face of Hermes called Hermes Trismegistus, who was believed to be the author of the “Hermetic Corpus”, a sacred text belonging to the genre of divine revelation. This god-prophet was the combination of the Greek god Hermes and the Egyptian god Thoth and his books enjoyed great prestige and were popular among alchemists during the middle ages. Hermes Trismegistus, whose name means “Thrice-Great Hermes” , is one of the leading character and prophet of Alchemy studies.

As I said, I noticed the incredible assonance with the Anger‘s film “Lucifer Rising” for the egyptian setting and the messaniac tone, but there’s one thing linking the two and that is Aleister Crowley. The Eye symbol in Madonna’s headpiece comes from the egyptian “Eye of Horus” from which, in turn, is derived also the masonic symbol of the pyramid with the eye in it (Eye of providence) that now you can see in american dollars. Madonna is not new to this symbol (see the jacket she wore in the 1985 film “Desperately Seeking Susan”) and it’s possible to see Aleister Crowley wearing a pyramid hat with the Eye of providence. Also, Aleister Crowley was himself attracted to egyptian mythology and called his messianic age the Aeon of Horus.

The entangled weave of references between mass culture and esoteric language is attractive and I’m not the first to notice it (there’s a big discussion about the relation between Lady Gaga and Illuminati sect). Is this the usual american potpourri of classical references mixed with pop, which became extremely kitsch, or is this an exact and ironic system of references? I’m not saying that behind a mere pop performance there is a conspiration or a kind of, but everything was so full of symbols that it was impossible not to notice. The whole event seemed to me a pop-kitschy Mass, including the worship of the god (the pop icon) who appears crowned on a throne in front of her faithful believers. But maybe the only holy thing, in all this show, was the commercial break, that is, dollars.

You can read another interesting articol here, the only thing I found about the same weird references I had too and from which I take some pictures. Roman legions pull Madonna to the center of the field, like an Empress or a Goddess. The veil is lifted and Madonna is revealed to be the Goddess Isis. While Madonna is singing Vogue, this picture appears on the floor. It looks very similar to Aleister Crowley’s third eye picture (below). Madonna’s hands are in roughly the same position. Aleister Crowley wearing the pyramid hat with the Eye of providence. a big eye appeared during the show

The Eye of Providence and the Eye of Horus It all ends with a mass with Madonna wearing a hieratic black dress singing her prayer “Like a prayer”. other things that came to my mind: General Kala in “Flash Gordon” in 1980; Siouxsie Sioux; an evening cape made of lame by House of Worth in 1925; Divino Otelma, a comic italian magician; Biba egyptian changing room in 1975; Elizabeth Taylor in Cleopatra, 1963.

pictures sources: conspirazzi.com; dailymail.co.uk, tumblr, scans and collage by me.