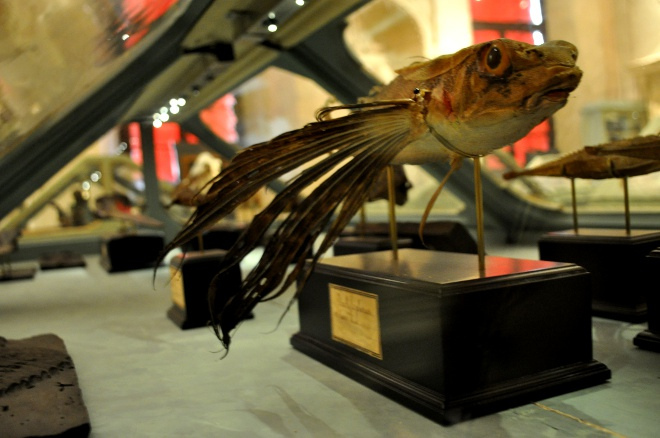 During my short trip to Bologna in April, I visited Palazzo Poggi, a wonderful museum which hosts what remains of the collection of Ulisse Aldrovandi, one of the first natural philosopher and scientist.

In the transitional phase from a culture based on wonders to a more scientific approch in studying nature phenomena, appears Ulisse Aldovrandi who, even if still attracted to wonders and monsters, was the first to plan a systematic way of studying nature.  An eclectic figure whose interests ranged from zoology to anatomy, including ornitology, entomology and botany.

Despite in his collections and works predominates a very carefully classifier approach, paradoxically it’s still clearly visible a true interest for mytical monsters and deformed creatures. So he seems attracted in the same way to insects and dragons, mermaids and deformed fetus. In 1573, in the honor of the new Pope Gregorio XIII Boncompagni, whose coat of arms had a dragon upon, he created one, assembling part of a snake, a fish and a bird. Then invented the story of its finding in order to make it more believable.

Aldrovandi was born in Bologna to a noble family, which sent him to apprentice with merchants, but he found his vocation, after studying humanities and law at the universities of Bologna and Padua and becoming a notary. He obtained a degree in medicine and philosophy in 1553 and started teaching logic and philosophy in 1554 at the University of Bologna. In 1559 he became professor of philosophy and in 1561 he became the first professor of natural sciences at Bologna (lectura philosophiae naturalis ordinaria de fossilibus, plantis et animalibus).

After a lively youth, travelling quite a bit throught Italy and Europe and while fighting a heresy charge, he became more and more interested in in botany, zoology and geology and began to collect plants, fishes, animals, stones, bones and every kind of specimens. His “theatre” illuminating natural historycomprising some 7000 specimens of the diversità di cose naturali, of which he wrote a description in 1595.

Between 1551 and 1554 he organised several expeditions to collect plants for a herbarium, among the first botanizing expeditions and at his demand and under his direction a public botanic garden was created in Bologna in 1568, now the Orto Botanico dell’Università di Bologna.

The design and organization of the museum, as a theatre or “microcosm of nature” in Aldrovandi’s own home was the result of a network of contacts Aldrovandi had in the regions of the Old and the New World.

Nearing the time of his death, he proudly stated that his home held a collection of 18,000 “different natural things” and 7000 dried plants displayed in fifteen volumes. The seventeen volumes with drawings of animals, plants, minerals and monstrosities were an integral part of the museum as were the fourteen cabinets, the Pinachoteche, containing the wood blocks used for the illustrations of the printed volumes.

In 1617 the museum was moved to the Palazzo Pubblico where it stayed until 1742, when it was transferred to the rooms of the Istituto delle scienze in Palazzo Poggi. In the course of the nineteen century the collections was largely broken up but, in 1907, portions of the collections were restored to their current location. Along with the collection of specimens coming from all over the world, Aldovrandi used to collect also drawings of animals hard to find or to preserve. Thanks to artists and painters like Agostino Carracci, Teodoro Ghisi, Jacopo Ligozzi, he created a huge archive made up of 8000 sheets, from which 3000 planks are still preserved today in the Biblioteca Universitaria di Bologna.

His most famous work is the Storia Naturale, a 13 volume printed work, was conceived as the most complete description of the three kingdoms of nature – mineral, vegetable and animal – available at that time.