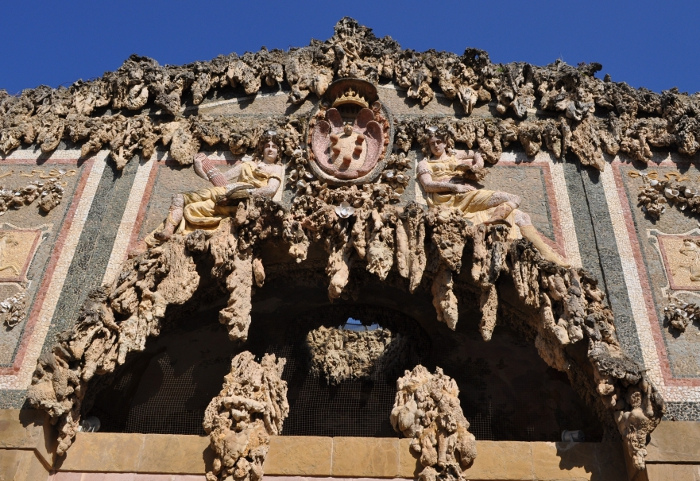 The Large Grotto is placed into Boboli Gardens, Florence, and it’s the biggest of the three grottos placed here along with The Mosé Grotto, The Little Grotto and the nineteenth-century Adam and Eve Grotto.

It is also known as Buontalenti Grotto from the name of Bernardo Buontalenti , the architect who realized it between 1583 and 1593. It was commissioned by Francesco I de’ Medici in order to complete the previous Vasari project, left unfinished, whose plan was to create a nursery garden.

On the two sides of the pillared entrance there are two niches with sculptures representing Ceres and Apollo by Baccio Bandinelli, originally being part of Vasari’s nursery. The facade is completely overlaid with concretions similar to stalagmites. The tympanum shows in the centre the Medici coat of arms supported by two feminine figures symbolizing Justice and Peace. The background is decorated by mosaic frames containing sort of sea goats and parget festoonery.

The Grotto is divided in three communicating rooms.

The first room is the bigger one: the walls are all decorated with fake stalagmites, stalactites, little stones,  sponges and shells shaping anthropomorphic and zoomorphic figures carved by Pietro Mati in order to resemble a natural grotto.

In the walls were set the Prisoners of Michelangelo until 1924, when they have been replaced by copies.

There is an oculo (hole) in the centre of the ceiling where originally was set a fishpond. Infact, before the restoration, the grotto was full of waterworks including sluices, forcing water to create iridescent shimmers on the walls while it was falling into the lateral baths.

The aim of this room was to surprise the spectator and almost scaring him creating illusions and confusion.

The second room houses the group “Paris and Hellen” (or Theseus and Arianna) of Vincenzo de Rossi (1560). The walls are decorated in the same way of the previous room and with frescos showing Giunone and Minerva framed into two illusionistic niches and surmounted by two tympanums.

The third room exhibit “Bathing Venus” of Giambologna, placed in a green marble fountain climbed by four satyrs spitting water. The walls are decorated with several niches and the ceiling is frescoed resembling a sky with flying birds.

Visiting the grotto was like a rite of passage.

The metaphoric meaning of the Grotto was the metamorphosis and the matter transition from chaos to order, one of the most important themes of the alchemical studies Francesco attended.