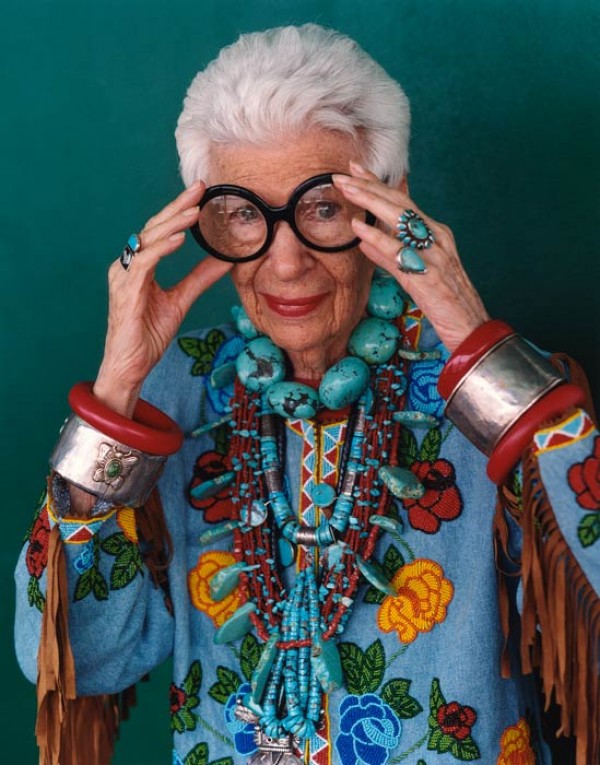 When you see Iris Apfel for the first time you might think: who’s this queer lady?

Not because she was able to create a textile firm like Old World Weavers, not because she took part in many design restoration projects, including work at the White House for nine presidents and not because in 2005  the Metropolitan Museum of Art in New York City premiered an exhibition about her style called “Rara Avis (Rare Bird): The Irreverent Iris Apfel.”

Businesswoman, former interior designer, she’s first of all a fashion icon. She created her own style just mixing everything she likes , not even care if the result would be grotesque or unlikely:

“I’m a hopeless romantic. I buy things because I fall in love with them. I never buy anything just because it’s valuable. My husband used to say I look at a piece of fabric and listen to the threads. It tells me a story. It sings me a song. I have to get a physical reaction when I buy something. A coup de foudre – a bolt of lightning. It’s fun to get knocked out that way!”

Born Iris Barrel, she was the only child of Samuel Barrel, whose family owned a glass and mirror business, and his Russian-born wife, Sadye, who owned a fashion boutique.

So nothing strange in mixing Lanvin dresses with Tibetan oversized jewelry, fringed cowboys jackets with big Navajo necklaces, feathered coats with a huge incrusted parrot brooch (Hanna Bernhard), all bound together with her signature big round glasses. “My look is either very baroque or very Zen, everything in between makes me itch.”

“It was her eye for unique furnishings and objects, as well as her facility with color and texture, that brought her instant success: -I don’t do run of the mill stuff- she says -and I don’t do minimal-.”

Her three-bedroom Manhattan apartment, a Park Avenue, is exactly how she dresses: “Everywhere there are exquisite French chairs, painted Genoese chests, antique paisley shawls, New Mexican santos, and much, much more. All of it was acquired, Apfel says, “a piece here, a piece there,” during the many European buying trips she made over the years.”

She’s also famous for her huge collections of accessories especially jewels “I have amassed an enormous collection of bags, belts, bangles and beads without which I would be lost. One can change the entire look of an outfit by substituting one accessory for another. I love objects from different worlds, different eras, combined my way. Never uptight, achieving — hopefully — a kind of throwaway chic.”

The big news is that Apfel will be launching (hopefully in september 2011) her first jewelry collection via Home Shopping Network (HSN) called “Rara Avis by Iris Apfel”. The 13-piece collection is priced between $20 and $180 and it’s mostly made up of Lucite, mixed metals and beading, and according to WWD “fuses modern and vintage elements and features brightly colored chunky necklaces, bracelets and brooches.”

We can remain doubtful of her taste in furnishing and of her exuberant sense of style, but she shows exactly how kitsch can become beautiful and a spunky mishmash can look an harmonic and pleasing place.

Wearing Chado Ralph Rucci and jewelry of her own design in the New York City apartment she shares with her husband, Carl. The living room’s bleached-oak boiserie is 18th-century French, and the door hardware is by P. E. Guerin; the screen is also French, while the chair at left, covered in an Old World Weavers tapestry fabric, is 17th-century Sicilian.

In the library, a Dutch painting is displayed above a Louis XVI daybed covered in fabric Apfel reproduced from a 17th-century French document.

A collection of singerie tops an 18th-century Venetian bombé chest in the living room; the back of the English chair at right is painted with chinoiserie designs.

In the entry, an 18th-century English gilt chinoiserie mirror and an Italian console
.

An Italian tole chandelier above a Maison Jansen table draped in a woven paisley throw.

Bakelite jewelry in the paws of a hand-carved French mountain dog.

The first painting Apfel ever bought—a portrait of the Infanta Margarita she picked up 60 years ago at an antiques shop in Florence.

“I was one of the first New York women to wear boots,” says Apfel, who designed the gilt-leather-and-fabric pair on the floor at right. Racks of her vintage pieces fill a spare room; she is especially fond of the metallic-check coat by Galanos.

A hallway is lined with dog paintings and 19th-century English bookcases brimming with volumes on fashion, decorative arts, and Chinese costumes and textiles.