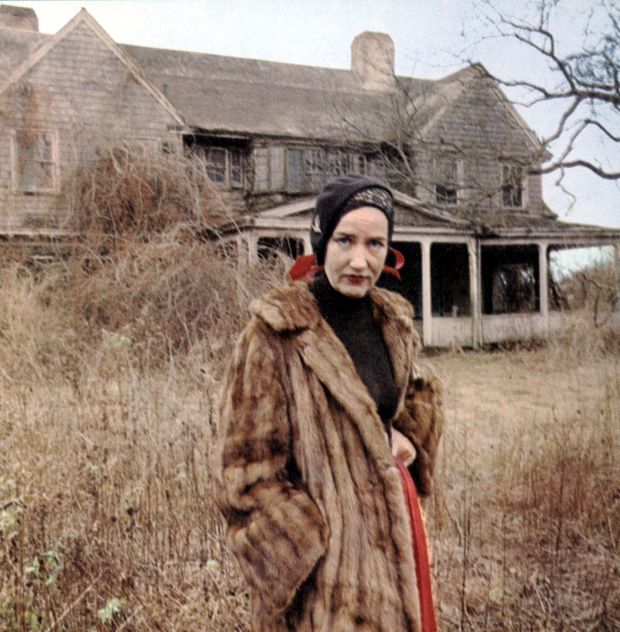 “It’s very difficult to keep the line between the past and the present.”

The house was bought by the tycoon Phelan Beale, Big Edie’s husband and Little Edie’s father, in 1923. It was an happy time and life was beautiful for the two Edies: in this villa, american aristocracy used to hold elegant parties while Big Edie sang some beautiful songs. Little Edie was having a happy youth, she attented the most exclusive schools in NY and her debut was reported by Ney York Times in 1936. She was very beautiful and wished to become an actress and, despite her father’s will, started to modeling. She also received proposals from some of the richest men of that time, like Paul Getty Jr., Joe Kennedy Jr. and Howard Hughes. From 1947 and 1952 she lived in New York, in a room at Barbizon Hotel. She also had an important affair with a politician (Julius Krugg) who was married, anyway, she never married. Little Edie was beautiful and wealthy, she could have had everything she would, but destiny deserved something different.

In 1931 Big Edie and Phelan divorced: he leaved Grey Gardens while she continued to live there and worked as a singer. She also had other men later, like a pianist and a handyman but, year by year, she couldn’t manage the house anymore and was forced to call back her daughter Little Edie, who left her launching carrier as actress to take care of her mother. The two Edies started to live together and, as years were passing by, the house fell into ruin. Mother and daughter lived in a world of their own until, in 1971, they were under threat of being evicted, due to the bad state of the property. They lived with lots of cats, raccoons and fleas, deprived of running water, and filled with garbage and decay. The house was a damp, big Eddie had a cooker on her bed, animals went to the toilet behind Edie’s portrait, the fridge was in the bedroom and they mainly ate ice cream. In the summer of 1972 Jacqueline Onassis and her sister Lee Radziwill provided the necessary funds to stabilize and repair the dilapidated house.

Albert and David Maysles became interested in their story and received permission to film a documentary about the women, which was released in 1976. They got to spend time with the Edies at the height of their eccentricity. The documentary shows the daily life of the two Edies after the renovation of Grey Gardens.

One thing that strikes the most is the wonderful yet eccentric sense of style, especially of Little Edie, who also suffered of alopecia. Although totally poor and living in in filth and squalor conditions, the two Edies didn’t loose all the whims of high society girls like dressing up, listening to music, dancing. Little Edie, despite being in her mid 50s, is not afraid of showing off her legs. She is always wearing a scarf and usually dresses in tight tops and hot pants or some kind of home made skirt. She also has a wonderful brooch that is mostly pinned to her scarf.

The entire story is imbued by a sad feeling and nostalgia. The two women lived in symbiosis, both cling to their past lives, with each still believing that that life can exist, Edith as a singer, and Edie as a social débutante. Edith lives primarily in her bedroom in her twin bed which is covered with garbage and cats, who use the corner of the room as a bathroom. And Edie constantly dreams of a time when she can return to living in New York City as a débutante and dancer, although one realizes that she is only using her mother as an excuse for what she really considers her comfortable current living situation.

sources: sneakymagpie.com; imdb.com; greygardensnews.blogspot.com; here you can read the story of the house after Edies’ deaths; qui un articolo in italiano. “I only care about three things: the catholic church, swimming and dancing.” Little Edie “I don’t have any clock. I never know what time it is.” Little Edie “The moving finger writes and having writ it moves on.” a quote of Omar Khayyám that Little Edie wrote on the wall. Grey Gardens in the 20’s Little Edie as a child with her mother a young and beautiful Little Edie The Magick Lantern of Kenneth Anger