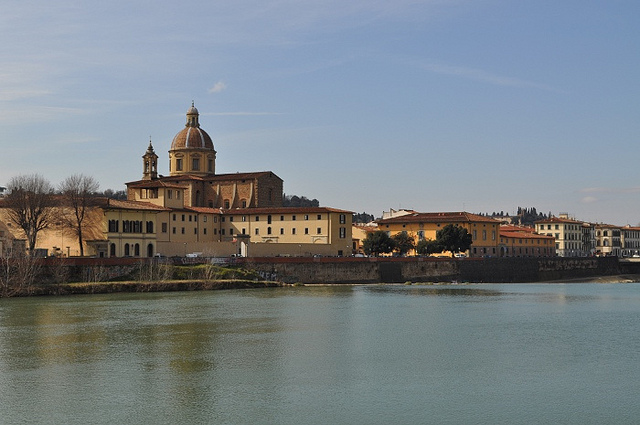 Florence is a colourful city and it seems to be stuck in the XVth century .

My best friend Gio lives there so I decided to visit her for a weekend. The day was a little windy and the Arno seems grey and smoky. After strolling for a while through the backstreets, I visited the Brancacci Chapel, famous for its frescos of the Life of S. Peter by Masolino e Masaccio created between 1425-27 and then completed by Filippino Lippi. The Chapel is a breathtaking masterpiece that show the stern and realistic line of Masaccio who was, according to Vasari, the best painter of his generation “because of his skill at recreating lifelike figures and movements as well as a convincing sense of three-dimensionality”. Unfortunately he died when he was just 27 years old.

While I was walking along Via Maggio my eyes were caught  by the house of Bianca Cappello, lover and later wife of Grand Duke Francesco I. The house maybe has one of the most beautifully decorated facades in the whole Florence: it’s completely overlaid with black and gold graffiti by Bernardino Poccetti (who also painted the Buontalenti Cavern in Boboli Garden). Underneath the two ground floor windows can be seen a bat with outspread wings, a favourite motif of the architect Buontalenti who built the house in 1567.

What really left me speechless was the Museum of Zoology and Natural History “La Specola” , the oldest scientific museum in Europe, opened to the public since 1775. It holds over 3.500.000 animals and also the largest collection of anatomical waxworks in the world, manufactured between 1770 and 1850. If you like taxidermy, oddities and grotesque things, that’s the right place for you.