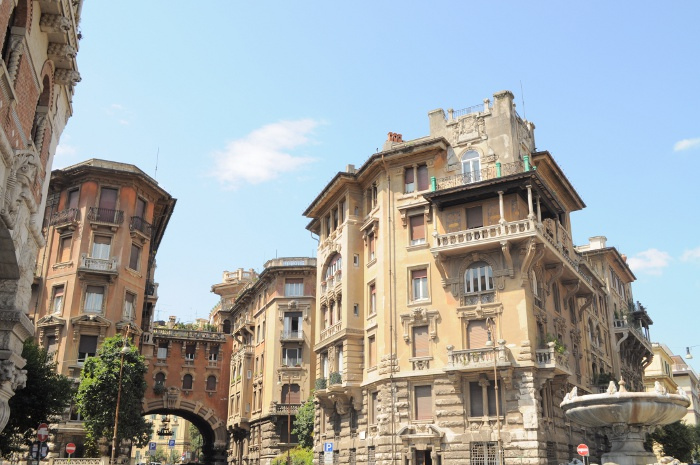 Here’s placed the Coppedé quarter, built by the architect Gino Coppedé in 1913-1926.

The great but dark arcade in Tagliamento street  is the main entrance: a big ironwork chandelier is hanging from the vault, sideways a Madonna with Baby will welcome you. Suddenly you’ll discover an enchanted place, full of towers and mosaics, masks and symbols, totally away from usual city landscape.

An oddly architectonic pastiche influenced by baroque, mannerism and medieval architecture, liberty and art deco, classical and even assyrian-babylonian statuary, passing through cattolic iconography and movie reminescences . This is the ecleptic and personal style of Gino Coppedé, born in Florence in 1866. His father was a woodcarver, his teacher was the portuguese architect Alfredo d’Andrade, well-known for his falsification of ancient monument style and who built the Borgo Medievale in Turin. This fantastic area, made of 17 houses and 26 buildings randomly organized and completely overlaid by strange figures, floral and geometric ornaments, animals and cryptic epigraphs, seems  like a setting straight out of a dream.

Don’t try to find any meaning in the Frog fountain, the Fairy and the Spider House or the latin epigraphs, the zodiacal clock, the sundial, the roman colums and Grecian urns. This labyrinth, sort of a strange mix between Gaudì buildings, Escher surreal drawings and gothic XIV-XVth century churches, is said to hide religious, magical, alchemical or even satanical meanings.

It was left unfinished because of Coppedé death. He killed himself at the age of 50. On a sunny day in June