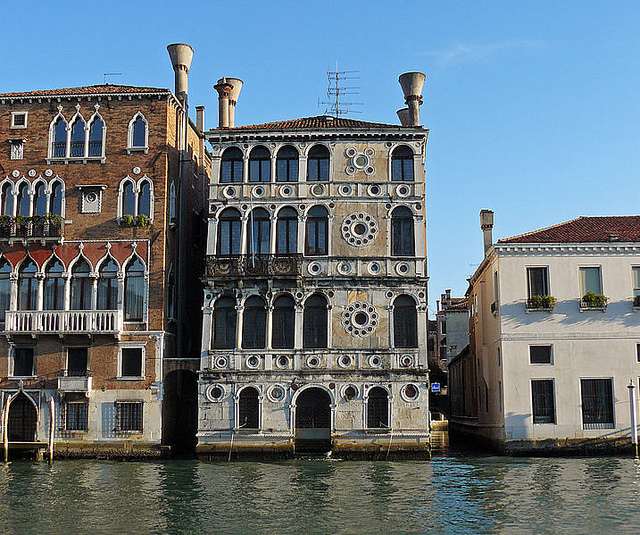 Ca’ Dario is a private palace in Venice, located in the Dorsoduro quarter, facing Canal Grande.

Even if what at first may catches one’s attention is the magnificent facade, decorated with circular polychrome marbles inlays, or at least its being slightly leaning, the palace hides secrets of what seems to be an obscure curse.

Ca’ Dario was bought by Giovanni Dario, who assigned the task of remodeling the palace to the architect Pietro Lombardo at the end of 15th century. Actually the date of the work on Ca’ Dario is unsure, except that it must to have been done between Dario’s return from Constantinoplein, in 1486, and his death in 1494. Giovanni Dario was, infact, diplomat, merchant and Secretary to the Venetian Senate for which he functioned as ambassador in Cairo, to the court of the Mamluk Sultan Qw’it Bay, and in Byzantium. Very likely the oriental influence can be explained by Dario’s travels in Egypt and Middle East, but we can’t exclude the influence of cosmatesque works (easy to find all over Italy), San Marco similar inlays and other Venetian churches like Santa Maria dei Miracoli. Similar decoration can also be seen in coeval paintings by Carpaccio, Cima da Conegliano and others. On the basement of the palace one can read the latin inscription: VRBIS GENIO IOANNES DARIVS (Giovanni Dario patron of the city).

John Ruskin remained particularly struck to see Ca’ Dario and talked about it in his “The Stones of Venice” (1853) and also did some watercolours of the facade and its details. During 1908 Monet painted Ca’ Dario in a series of paintings representing the same view but in different moments of the day. Gabriele d’Annunzio often mentioned Ca’ Dario in “Notturno” and in the novel “Il fuoco”. In 1977 the palace was also furnished by Giorgio Pes, architect, interior designer and favorite set designer of Luchino Visconti.

… and the dark insides.

But its fascination become more intriguing after knowing the stories of its several owners. Giovanni Dario’s daughter, Marietta, committed suicide after her husband, Vincenzo Barbaro, went out of business and died from stubbing. Their son, Giacomo Barbaro, died in Crete in 1650, falling into an ambush. For a long period informations about owners seems to miss. Then it seems that the palace came into the possession of an “enigmatico” Armenian diamond merchant (Arbit Abdoll) and marchese in the early 1800s, who died there in poverty after his business failed. The house was then bought in 1837 for 480 pounds sterling (as John Ruskin wrote) by Rawdon Brown, who made the first restorations. His death was supposed to have been suicide at an early age caused (again) by financial ruin. He spent so much on restoration he was forced to sell Ca’ Dario in 1842: the buyer was a Hungarian count. Between 1800 and 1900 came to Ca’ Dario the french poet Henry De Regnier, who wrote here “L’altana ou la vie vénitienne”. He died after few years for serious ill.

In 1964 the tenor Mario del Monaco started the negotiation to buy the palace but, while he was coming to Venice to end the deal, he had a road accident and then gave up. Then was the time of the american multimillionaire Charles Briggs, who was later banned from Italy because his homosexual affairs. His partner, Osvaldo de Carrera, commited suicide few months later in Mexico. During the night of the 19th of July 1970 the palace saw an homicide: the last owner, Conte Filippo Giordano delle Lanze, was murdered by a Croatian sailor, Raoul Blasica, his lover. Kit Lambert, producer and manager of The Who, owned the Palazzo in the early 1970s. He died few time later in London, falling from a staircase or killed by his drug dealer.  In the middle of the 80’s was a Venetian financier to buy Ca’ Dario: Fabrizio Ferrari. His idea was to turn the Palace into a meeting hall, but in a few time he ruined and his sister, Nicoletta, died in road accident. At the end of the 80’s financier Raul Gardini bought the Palazzo to give it to her daughter, but after going through a series of financial problems and after being involved in Tangentopoli-gate, he killed himself in 1993. At the end of the 90’s also Woody Allen was interested in buying Ca’ Dario, but then gave up.

In the winter of 2005 it was announced that an agreement had been reached between the Guggenheim Foundation and the present owner, Elisabetta Gardini Ferruzzi, who has had the palazzo up for sale for some time. The Guggenheim will not actually buy the palazzo but will instead a franchise on it at very favourable terms. In return, the name of the Gardini family will be associated with any shows that are held in the new location. left: Cima da Conegliano, The healing of  Anianus, second half of XV cent. The following pictures, as well as the most part of informations about Ca’ Dario, come from this site. The black and white photographs are views of Ca’ Dario taken with a pinhole camera by Gunter Derleth from “Venice. Camera Obscura” (2000). The pictures of the interiors are from Vittorio Sgarbi “Ca’ Dario. Mito e storia di Giovanni Dario e del suo palazzo tra Oriente e Venezia” (1984) which is, still today, the only book about Ca’ Dario, edited by the great publisher and versatile figure Franco Maria Ricci.